Here are titles of some school stories I recommend:

Off to School, Baby Duck!
Written by Amy Hest
Illustrated by Jill Barton
Candlewick Press, 1999
Baby Duck is nervous about going to school. It’s a good thing Grampa is on hand to help allay Baby’s fears and send her into class singing a happy song. 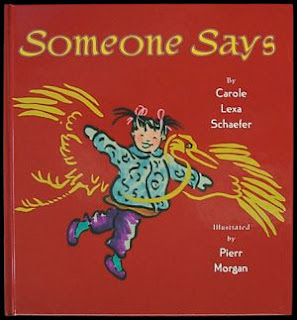 For children in nursery school through grade one. This book celebrates childhood creativity. The spare text and art work together perfectly in this joyful picture book about imaginative play.

A BAD DAY AT SCHOOL

Morris the Moose Goes to School
Written & illustrated by B. Wiseman
Harper & Row, 1970
Morris can’t read or count. He goes to school to learn how. Young children will enjoy all the funny situations and experiences Morris has during his first day in an elementary classroom.

Captain Abdul’s Pirate School
Written & illustrated by Colin McNaughton
Candlewick Press, 1996
This is a hilarious tale told via the diary of a young girl whose father has sent her off to pirate school to toughen her up. Children will laugh at some of the pirates’ names—Poop Deck Percy Ploppe, Walker the Plank, Yardarm Pitts—and will enjoy the ending in which the children attending the school outwit the pirates, take over the ship, become pirates themselves and decide not to return home. Ooh-arrgh!

A Fine, Fine School
Written by Sharon Creech
Illustrated by Harry Bliss
Scholastic, 2001
No matter how fine a school may be—too much of a good thing can prove to be a bad idea. Principal Keene learns about some of the other important things in children’s lives from a young girl who has the courage to speak up to an adult.

Hooway for Wodney Wat
Written by Helen Lester
Illustrated by Lyn Munsinger
Houghton Mifflin, 1999
Poor Wodney Wat (Rodney Rat) can’t pronounce his r’s. His classmates constantly tease him. When Camilla Capybara, a new student who is a big bully, enters the classroom, Wodney fears his days at school will only get worse. Fortunately for Wodney, he is a hero by story’s end because he gets rid of Camilla….forever.

Stand Tall, Molly Lou Mellon
Written by Patty Lovell
Illustrated by David Catrow
Penguin, 2001
Molly Lou is the shortest girl in first grade. She’s got buck teeth, has a terrible singing voice, and is quite clumsy. Her grandma gives her the courage to take pride in herself. Then Molly Lou moves to a new town away from her grandma and old friends. A bully picks on her and teases her—but Molly takes it all in stride and wins over her classmates…including her harasser.

Sailing Home: A Story of a Childhood at Sea
Written by Gloria Rand
Illustrated by Ted Rand
NorthSouth, 2001
Posted by Elaine Magliaro at 10:30 AM

I recently read Harry and the Dinosaurs Go to School by Ian Whybrow and with illustrations by Adrian Reynolds. I had read a positive review in The Horn Book, and it was really good. It's a good first day of school story, particularly for those going to school for the first time ever, whether pre-school or kindergarten.

Thanks, Jules. "Harry and the Dinosaurs Go to School" sounds like the kind of book young kids would really like. Have Jane Yolen and Mark Teague done a book about dinosaurs going to school, too?

I know there are plenty more school stories and first day of school books. I just included the the titles I have in my personal library.

Elaine, I don't know of a Yolen/Teague book about that, but you never know if one will be created.

I stopped by a children's book shop on Wednesday and saw the Yolen/Teague book on display. I think the title is "How Do Dinosaurs Go to School?"

The back to school book I think is really needed is the one for the shy parent worried about making friends with the other parents, because if she doesn't her child will never have playdates, and worried even more about whether the teacher will like her...

I am bookmarking this page for when I get back in my library. Good choices!

Teachers were always asking for books like these at the beginning of the school year, too--and I was always looking for some good school stories to add to our elementary library collection.

Thanks! These are books I have in my personal collection. I know there are many others--but I only wanted to recommend books I had read.