If I Built a Car 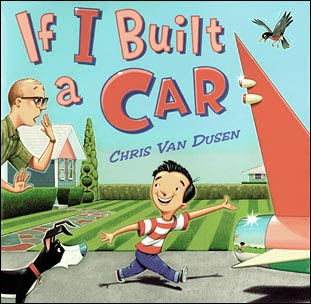 IF I BUILT A CAR
Written & illustrated by Chris Van Dusen
Penguin, 2005

Chris Van Dusen is also the illustrator of the Mercy Watson books written by Kate DiCamillo. His style of illustrating is very much the same in If I Built a Car, which is a recipient of the E. B. White Read Aloud Award.

In the book's author blurb, Van Dusen tells readers that he "has always been intrigued by glimpses of the future found in the 1950s and '60s issues of Popular Science magazine. Headlines would read The Car of Tomorrow!, and fantastic artwork might show sleek machines zooming down 'magnetic highways.'" Van Dusen's artwork in If I Built a Car certainly transported me back to the 1950s. It reminded me of the glimpses of the future we saw in magazines and on television back then. I'd like to note that I asked my husband to read the book last night and give me his opinion. My husband, who used to read Popular Science when he was a kid, loved the book!

If I Built a Car isn't a story with a beginning, middle, and end. It's a book written in verse in which a young boy relates to his father the kind of car that he would like to design and build. It's a book about using one's imagination and having dreams.

About the Book: Jack, the young narrator, tells his dad what his "future" car will be like while they are out driving. Jack explains to his dad what materials the car will be made from, the elements of its design, and all the nifty features it will have.

You'll see that I've added a lot of neat things:
Plush fender skirts and retractable wings,
Three headlights up front, four taillights in back,
Plus two giant fins like our old Cadillac!
My brand-new design will be curvy and round,
With special jet engines that don't make a sound.
I'll paint it bright colors with accents of chrome
And top it all off with a Plexiglas dome.

The illustration that accompanies this excerpt is a two-page spread that shows what Jack imagines his car will look like. The gouache painting of the huge car is bright and colorful. Through the semi-transparent dome, we can see the outline of shapes. Is that a robot at the wheel? Is that a table lamp? Kids will certainly want to see what's under the dome of Jack's imaginary car.

In addition to the the fins and dome and jet engines and retractable wings, Jack explains that his car will also have a chassis made of polymer gel--his invention--that will prevent the car from getting dented if it should hit something. Some of the other features of his auto include a couch, a fish tank, a fireplace, a pool beneath a sliding floor, an instant snack bar, and (yes) a robot to steer the vehicle when the driver gets sleepy! But...wait...that's not all! The fenders of Jack's car will let it float on water like a catamaran. The car will also be able to submerge so the driver and passengers can investigate underwater. And the best feature of all?

Last but not least, the best feature of all
Comes down to a button that's shiny and small.
Push it and then, in the wink of an eye,
The car will take off! We'll be up in the sky!

I think Van Dusen's colorful retro-style illustrations are a perfect complement to his rhyming text. Even really young children who can't read could have a grand time studying the pictures of Jack's futuristic car. The front and back endpapers are filled with Jack's labeled sketches of his car's design. They'd be a great inspiration for young artists.

I know I would have loved this book when I was young. I think any kid who is a daydreamer would. It's a perfect picture book for kids who are mechanically inclined...for kids who like to draw...for kids who like to build things. It's definitely a great book for budding engineers. I am planning to give If I Built a Car to a grand nephew for summer reading. I bet he'll be inspired to design his own car of the future!

Click here to see Jack's car blasting out of the water into the sky.


If I Built a Car is on the 2008 Master List of the Monarch Award sponsored by the Illinois School Library Media Association.

Posted by Elaine Magliaro at 12:50 PM

What a great site! I'm so glad I found you.

Glad you like my blog. Hope you'll visit again.