A PERFECT PAIR: Lissy's Friends & Fold Me a Poem

In Welcome to Wild Rose Reader, my inaugural post, I set down my high hopes for this blog. One of the things I want to write about are books that make a perfect pair—or two books with a common storyline or theme. I decided to wait until LISSY’S FRIENDS, Grace Lin’s new book, was published before I wrote my first perfect pair post. That’s because I think Grace’s picture book and Kristine O’Connell’s George’s poetry book FOLD ME A POEM would be great to use together in a classroom mini-unit. 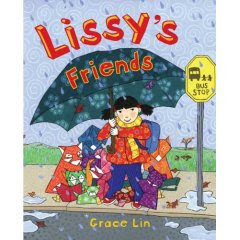 LISSY”S FRIENDS is a story about a young child who is the “new girl at school.” Lissy feels like an outsider. She has no friends. She spends her recess time alone on the playground. She eats lunch by herself. One day during lunch, Lissy takes the school menu and folds it into a paper crane, which she appropriately names Menu. Before Lissy knows it…Menu comes to life and flutters its paper wings. None of the other children are aware of this. Now Lissy has a happy little secret…and a new friend! The next day, Lissy crafts more friends for herself from colorful, patterned origami paper. Her new friends go everywhere with her—even to school. Lissy doesn’t feel lonely any longer.

Then a schoolmate named Paige comes along holding Menu. She asks Lissy if Menu is hers. Paige thinks the paper crane is nifty and asks Lissy if she will show her how to make one. Soon after that, Paige comes to Lissy’s house and the “new” friends make origami animals, chatter, and laugh with each other. In the illustration other children from the school are pictured peeking in the window at the two girls. The very next day, we see Lissy happily spinning around on the merry-go-round with lots and lots of school friends—most of whom are holding origami animals. She has been accepted into the group.

The final illustration in the book shows a picture of Lissy’s animal friends sitting at a table in an outdoor café in Paris and a postcard message saying: “We hope you are doing well. We are having fun traveling the world. We miss you.”

LISSY’S FRIENDS is a story to which many young children can relate—whether they are new students in a school or shy or different children who may have few close friends. This is a fantasy that touches on reality: a child who feels alone in a sea of children. It’s about a child with an imaginative mind who decides to occupy her “lonely” lunchtime with a creative pursuit. It is this artistic craft that helps bring her into a circle of “real” friends.

Grace’s illustrations in LISSY’S FRIENDS have everything we have come to expect in her picture book art: lots of bright colors, lots of different patterns, and the trademark swirls in the sky. The illustrations help tell Lissy’s story and are a perfect complement to the text.
The Lissy Doll 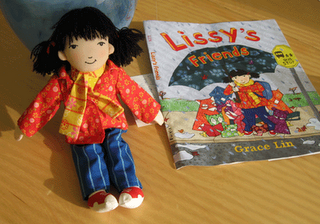 (Note: Grace Lin is a good friend—but I would not have written this review if I didn’t think LISSY’S FRIENDS was worthy of recommendation.)


True Story
I once had a student (I’ll call Eddie) in my second grade. Eddie was overweight. He had learning difficulties, a terrible home life, behavior problems…and no friends in my classroom. Eddie was, however, one of the most artistically gifted children I ever had as a student—and also one of the funniest. I loved that kid!

We did lots of art projects in my room. I praised Eddie’s creations…showed them to his classmates. And I laughed at the funny comments he made. My other pupils began to see Eddie in a new light. They often asked for his help when working on their own projects. He began to feel good about himself. His behavior improved and he began to work harder in school. Even the music teacher spoke to me one day about Eddie’s remarkable metamorphosis.

I knew Eddie was one smart kid. I referred him for additional testing that year. His IQ determined by a WISC? 136!!! This story is an example of how a career in education can bring a teacher great personal rewards.

FOLD ME A POEM 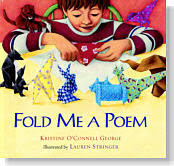 FOLD ME A POEM is an excellent book to share with children after reading and discussing LISSY’S FRIENDS. It’s a collection of poems about origami creations—most of which are animals, including a rooster, a camel, a robin, dogs, a cheetah and lion, a frog, peacocks, a snake, rabbits and foxes, and penguins. George’s poems are haiku-like in their simplicity. Stringer’s uncluttered, colorful acrylic illustrations are a perfect complement to the spare text. This is a book in which art and text work hand in hand to make a unified pair of creative expressions about origami. Stringer even paints the endpapers to resemble six different patterns of origami papers.

At the end of the book there is A Note from the Illustrator in which Stringer informs readers of how she learned to do paper folding in preparation for painting the illustrations for FOLD ME A POEM. She even includes a bibliography of books about origami.


Find Out More about FOLD ME A POEM

Visit the FOLD ME A POEM page at Kristine O’Connell George’s website for links to teaching resources and further information about the book. Click on the titles below to read two poems from the collection:
Pond
Recycled

Lauren Stringer also has a FOLD ME A POEM page at her website. It includes links to a teacher’s guide, a view of an illustration from the book, and step-by-step instructions for making a paper snake, rooster, giraffe, and penguin.

What Do You Do with Books Like These?
It could be great fun to do a mini literature-writing-art unit in an elementary classroom using LISSY’S FRIENDS and FOLD ME A POEM. A teacher could read and discuss the story of how Lissy made her paper friends to keep her company when she felt lonely. Then, maybe with the help of the art teacher, students could make their own origami animals. And, finally, students could write poems about their paper animal friends…using George’s poems as models for their own writing. I think the children's origami art animals and poems would make an outstanding display in a classroom or school hallway.

Posted by Elaine Magliaro at 11:40 AM

Labels: a perfect pair, What do you do with a book like this?

I love this perfect pair concept! What a great way for one good book to help out another. Although I had already read (and reviewed on my blog too!) LISSY'S FRIENDS, I have never seen FOLD ME A POEM. (I'm heading over to my library site now to put a hold on it.) I did check out their websites. Very cool! Thanks!

Thanks, Gail. I had been planning to do more "perfect pair" blog articles--but April was a busy month for me beacuse I was posting an original poem every day. And May has been filled with all kinds of social and children's literaure events!

It is certainly interesting for me to read this blog. Thanx for it. I like such topics and anything that is connected to them. I would like to read more soon.

It is very interesting for me to read that blog. Thanks for it. I like such topics and everything that is connected to them. I would like to read more soon.

Cool post as for me. It would be great to read a bit more concerning that matter. Thank you for giving this data.

Good dispatch and this mail helped me alot in my college assignement. Say thank you you for your information.

Generic Viagra (sildenafil citrate; brand names include: Aphrodil / Edegra / Erasmo / Penegra / Revatio / Supra / Zwagra) is an effective treatment for erectile dysfunction regardless of the cause or duration of the problem or the age of the patient.
Sildenafil Citrate is the active ingredient used to treat erectile dysfunction (impotence) in men. It can help men who have erectile dysfunction get and sustain an erection when they are sexually excited.
Generic Viagra is manufactured in accordance with World Health Organization standards and guidelines (WHO-GMP). Also [url=http://twitter.com/tlkzfdn]Cheap Viagra 25mg[/url] you can find on our sites.
Generic [url=http://wumenalu.freehostia.com]Best Price 100mg Viagra[/url] is made with thorough reverse engineering for the sildenafil citrate molecule - a totally different process of making sildenafil and its reaction. That is why it takes effect in 15 minutes compared to other drugs which take 30-40 minutes to take effect.
[b]suppositories viagra infants
viagra help jet lag
viva viagra slogan
the best natural viagra alternative
niacin works like viagra
Viagra Nascar Jacket
store location generic viagra
[/b]
Even in the most sexually liberated and self-satisfied of nations, many people still yearn to burn more, to feel ready for bedding no matter what the clock says and to desire their partner of 23 years as much as they did when their love was brand new.
The market is saturated with books on how to revive a flagging libido or spice up monotonous sex, and sex therapists say “lack of desire” is one of the most common complaints they hear from patients, particularly women.