Boy! It’s been a busy weekend. I had hoped to write up my post about Grace’s party and post it this morning…but I had a birthday brunch engagement with ten of my oldest and dearest friends. (It isn’t my birthday. One of my friends turns sixty-one today…and one will turn sixty on Tuesday.) And when I say oldest friends, I mean it! Some of us have known each other since first grade. In fact, three of us attended elementary school, high school, and college together!
Here I am with my friends Kathy and Elly. 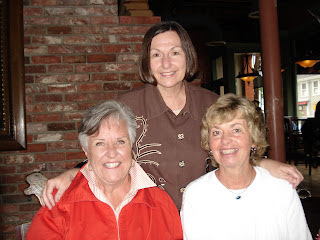 GRACE'S PARTY
Well…Grace’s combination birthday, book launch, and bon voyage party was a smash! It was wonderful to see some of the Robert’s Snow artists—including Leo Landry, Nicole Tadgell, Mary Newell DePalma—as well as Linda Wingerter, and Anna Alter, two of the Blue Rose Girls. Alvina Ling came—and Libby Koponen was there…with a “blue rose” in her hair! Actually, all of us Blue Rose Girls were ordered to wear the “blue roses” that Grace had made for us.
Libby, Grace, & I 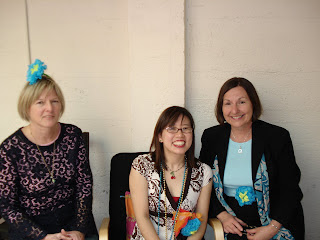 Barbara O’Connor, author of HOW TO STEAL A DOG and other fine books, came too…as did Pat Keogh of the The Foundation for Children’s Books. I met Lolly Robinson, who is the Designer and Production Manager for The Horn Book Magazine, and her friend Elizabeth. I finally got the opportunity to meet and chat with Eisha of 7-Imp. (Eisha’s even cuter in person than she appears in the pictures you’ve seen of her at her blog—and she looks about eighteen!) 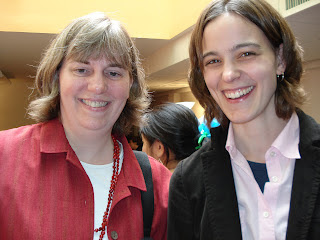 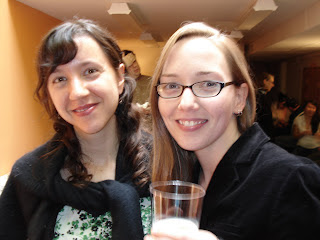 I never bumped into Vivian of HipWriterMama. Then again, maybe I did bump into her without knowing it. The only clues I have of what she looks like are from her children’s drawings I have seen at her blog. Sorry, Vivian, but I didn’t see anyone who quite resembled those pictures yesterday!

Steve Engel, the man who cut all the wooden snowflakes for the Robert’s Snow auctions, traveled all the way from New York with his lovely wife and two friends. Both friends won prizes in the raffle—a limited edition print from FORTUNE COOKIE FORTUNES and the original painting of the party invitation. That was one group of celebrators that fortune smiled upon yesterday.
Mary Newell DePalma, Steve Engel, & Nicole Tadgell 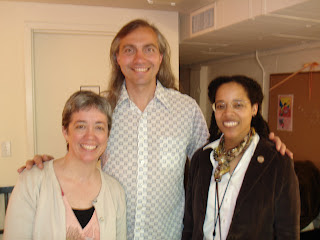 This is the delightful limited edition print from FORTUNE COOKIES FORTUNES that was raffled off at the party.

This is an image of the original painting of Grace's party invitation that a lucky individual won in the raffle. 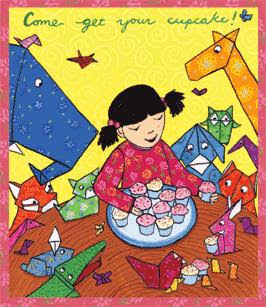 One can be sure that there would be lots and lots and lots of cupcakes at a party that Grace Lin hosted. In fact, Grace said she, with the assistance of several kitchen helpers, baked and frosted 144 lemon, carrot, and “pink” velvet cupcakes. We had other edibles, too: sandwiches, and cheese and crackers, and artichoke dip, and tapenade, and a huge basket of delectable gourmet cookies, and two enormous—and elegant—fruit arrangements. (See the picture below of one of the food tables.) I brought the wine. Libby, Eisha, a few others and I enjoyed the Prosecco—a delicious Italian sparkling wine. 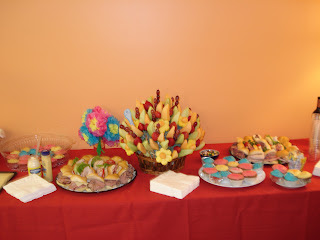 Once again, several of my photos came out blurry…so I don’t have as many pictures to post as I would have liked. I think I finally resolved my digital camera dilemma this morning!

Here’s a picture of Grace and her younger sister Ki-Ki. Ki-Ki is every bit as pretty and sweet as her older sister. 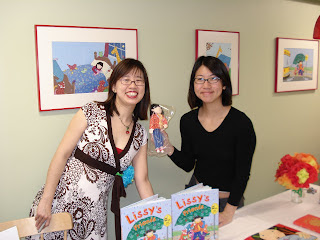 Grace was due to leave late this morning for San Antonio to join Robert who is already there. He will start his treatment in the clinical trial tomorrow. We are all hoping and praying for Robert 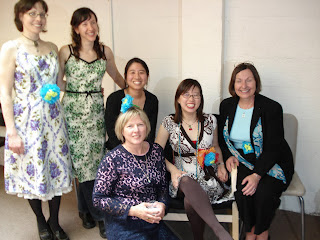 From the Blue Rose Girls to Grace and Robert: We will miss you... and keep you in our thoughts.

Posted by Elaine Magliaro at 5:40 PM

Great pics! I just posted some of my own over at the BRG blog.

It was great hanging out! Till the next event...

So glad someone took pics! Thanks!

It was great to meet you, Elaine!

Elaine, it was wonderful to finally meet you in person! And the other BRGs, too.

If it helps, Vivian was the gorgeous woman who (I thought) looked a lot like the actress Ming-Na.

Thanks for the wine!

Thanks for the pics! Looks like Grace really knows how to throw a party. Sure would have been great to be there and get to meet you in person.

Elaine, would Eisha and I also have permission to use that great photo of all The BRGs for the last upcoming BRG interview at 7-Imp (next Monday -- Libby)? What a great way to end the BRG interview series -- with a recent pic of all of you! Let me know (we would, of course, give you the credit and link to this post of yours).

Jules, you have my permsission to use the photo. You may want to check out Alvina's picture of us at Blue Rose Girls, too. I think you may be able to see Linda's face more clearly...and my eyes aren't closed in that photo. I'll leave the decision up to you.

Gee, it makes me all misty just seeing all the photos--in a good way. Thanks for all your help, couldn't have had the party without you!

I just wish more of my pictures were clearer. As someone said to me at the party, one is supposed to RTFM--or Read The F+*&%!@# manual, which I never do.
I think I finally figured out what was going wrong. I hope my pictures of Mary Ann Hobeman come out better than my pictures of Joseph Bruchac!

Grace, it was a pleasure helping out with the party. At least I didn't have to frost cupcakes for hours on end.

Barbara and Eisha, it was a pleasure meeting both of you!

It was good to see you again, Elaine, and thanks so much for all you do for Grace and BRG. You were kicking it all night.

Thanks, Elaine. I just remembered, though, that Meghan's not in the photo, but we might use it anyway?? Thanks for the permission!

Meghan is pretty elusive...and camera shy. We might not have gotten her to pose for a picture even if she had come to the party.