Poetry to Take You through the Year, Part 2

﻿
The following three poetry collections take us through the year month by month: 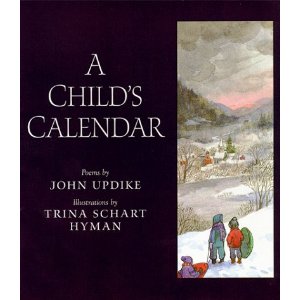 A Child’s Calendar
Written by John Updike
Illustrated by Trina Schart Hyman
Holiday House, 1999
The first edition of A Child’s Calendar—illustrated by Nancy Ekholm Burkert—was published in 1965. This newer edition—illustrated by Hyman—received a Caldecott Honor Award. I’d say deservedly so. Hyman’s evocative paintings portray events, activities, and scenes that are representative of each month. Children are shown making valentines in February….flying kites in March…enjoying a family picnic in July…trick-or-treating and jumping in piles of leaves in October. Hyman’s illustrations extend Updike’s text. They take readers through the year hand-in-hand with his poems. 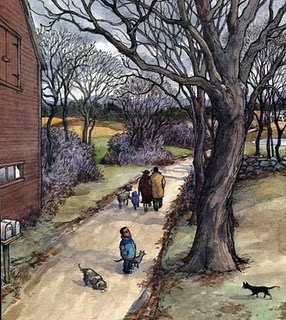 November
﻿
The twelve poems, written in stanzas of rhyming quatrains, are crisp, concise, and filled with imagery, personification, and figurative language:

In January, the sun is “a spark/Hung thin between/The dark and dark.

In April, “The sky’s a herd/Of prancing sheep…”

In September, "The breezes taste of apple peel."

In October, “Frost bites the lawn./The stars are slits/In a black cat’s eyes/Before she spits.” 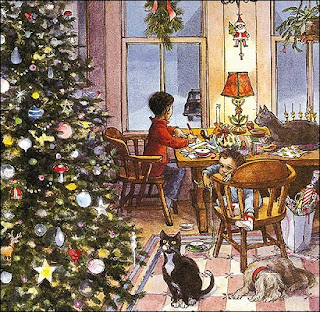 ﻿December
Updike made small changes to some of the poems for the 1999 edition. For example in January, milk bottles no longer “burst/Outside the door.” Instead—“parkas pile up/Near the door.” And in June, children play hide-and-seek after supper in lieu of kick-the can.

A Child's Calendar is a topnotch poetry collection written and illustrated by two talented and highly respected individuals who were stars in their respective professions.

Note: I used to tell my students to listen for clues as I read poems from this book to see if they could name which month Updike was describing. My pupils enjoyed the challenge.

Another Note: Ariel S. Winter has an excellent post about A Child’s Calendar, the two different editions of the book, and changes made to the newer edition at his blog We Too Were Children, Mr. Barrie. Click here to read it.
******************** 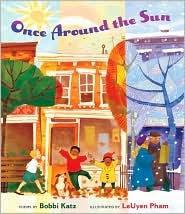 Once Around the Sun
Written by Bobbi Katz
Illustrated LeUyen Pham
Harcourt, 2006
Each of the twelve poems in this collection begins the same way: January is when…February is when…December is when…. One might think this approach would lead to poetic monotony. Not so…not in the talented hands of Bobbi Katz. The author breathes personality and life into the different months with her imagery and creative use of language:

Katz provides an excellent example of what an imaginative and adept writer can do with a simple concept. She selected a unifying model for all of her poems about the months--but showed how creative a poet can be even when limiting herself to one type of poem.

Pham’s bold illustrations burst with color and exuberance. Close-ups and changing perspectives add energy and life. They are a wonderful complement to Katz's inventive text.

Click here to read Katz’s poem about the month of June. 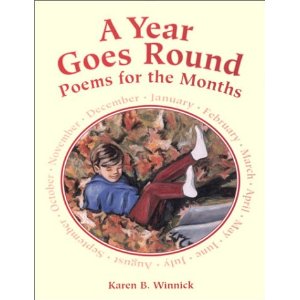 A Year Goes Round: Poems for the Months
Written & illustrated by Karen B. Winnick
Wordsong/Boyds Mills Press, 2011
Winnick didn’t limit herself to writing just one poem about each of the twelve months. Except for January, there are two poems for each month—and three for December. The seasonal poems include a wide variety of subjects--making snow angels, a winter beach, reading indoors, baseball tryouts, April rain, frolicking in waves at the shore, playing dodge ball, fall leaves, Halloween disguises, feeding a goose in autumn, the first snow.

Some poems are energetic. Many are reflective and thoughtful—like Welcome Back and Summer’s End:

Frog,
I missed you when
the pond froze thick with ice.

You disappeared but then--
you must have checked the clock.

Now you're here with spring,
back sunning on your rock.


to swims in the sea,
sleepovers for three,


In the wink of an eye,
all of summer—gone by.

The authors of these three poetry collections used different approaches in writing about the months. Sharing poems from the books with children can help show them how different poets view the months and write about them in their own unique voices.

Click here to read my post from last Friday: Poetry to Take You through the Year, Part 1.

Thanks for this wonderful sampler platter of seasonal poems. Hyman's art is to die for. I love "the breezes taste of apple peel," and those "yellow pencils wearing eraser hats."

All three of these books are new to me, so this post is a special treat. Thanks, Elaine!

These books are also new to me. I am so glad to learn about them. I love "the breeze tastes of apple peel."

You are always such a terrific resource, Elaine! I bought that Updike book so many years ago, and I agree...it's beautiful in word and picture. What a lucky little grandchild you have. I can't wait to see the poetry that comes of that tiny mouth and hand! A.

Wow! Thank you for telling about these beautiful books. They are new to me and will be added to my wish list. The knowledge that Updike wrote such sweet poetry is a surprise. I know Hyman's art, but it's a wonder every time I see it.

Beautiful beautiful books indeed! I am hoping I can get myself copies of these wondrously illustrated books that breathe poetry.

I am particularly fascinated with the Child's Calendar - I agree with 'teacher dance's' description of Hyman's artwork - the bits and pieces you shared with us here really look fascinating.

Once Around the Sun sounded like such a treat too. This is my favorite from that book:

Really lovely. Thanks for sharing.

This is a good article and offer some helpful information for me,thank you!