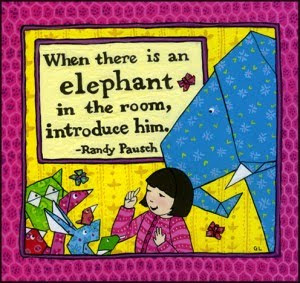 The Elephant in the Room by Elizabeth Bluemle (Publishers Weekly, 6/10/2010)
Excerpt:

Publishers, how ivory are thy towers? According to statistics—not to mention a quick glance around any trade show floor—pretty shockingly ivory, maybe along the lines of 98%. The number of publishing, editorial, art direction, sales and marketing professionals of color in our field is tiny, and that’s not good for anybody. This discrepancy between the real world and the publishing world limits the range of books published, the intellectual scope of discussion, and—for the bottom-liners among us—greatly stunts the potential market.

The truth: we in the book trade have fallen shamefully behind our own culture, and our own times. We can remedy that with open dialogue, new paradigms, and concerted effort. And—we have to remedy it. When adults shout racial epithets at our country’s elected leaders, when bullied children are hanging themselves out of despair and shame, when children’s faces in art murals on the sides of schools are criticized for being “too dark,” when racism is still alive and vicious in this country, we can’t politely avert our eyes.

It is our responsibility—as people who create, produce, and distribute the lion’s share of books that reach and teach and entertain children—it is our highest calling to provide written, illustrated worlds that embrace and prioritize all children, books that resemble the playgrounds and classrooms and homes of this country and the rest of the world. And in order to do that, we must open the gates of our publishing houses to a greater variety of voices and cast aside outdated assumptions of what people will or won’t want to read, will or won’t want to edit or publish or sell.

Preserving the Environment—Books That Encourage Stewardship by Barbara Ward, Deanna Day, and Terrell A. Young (Book Links, June 2010)
Posted by Elaine Magliaro at 10:17 AM

Thanks for sharing the six traits article link!

Dear Elaine,
Thank you for this wonderful list. You are always such a generous resource to all of us...I will share this link tomorrow.
Warmly,
Amy

Thanks so much for linking! -Amy