How about writing a poem in the form of a letter? It could be a love letter, a letter of complaint, a thank you letter. Here is an “angry” letter poem that I wrote from Mama Bear to Goldilocks for a collection of fairy tale poems.

You sneaked into our summer camp

And ate my little baby’s bowl

Of porridge, broke his chair, then stole

Upstairs and napped on Baby’s bed.

You ripped the new embroidered spread

His Grammy gave him yesterday.

This time you may have slipped away.

But if you ever come back here,

I’ll grab you, Goldie, by the ear—

And cut off all you curly hair!


Here’s another rhyming letter poem that I wrote and posted previously at Wild Rose Reader:

LETTER FROM THE QUEEN OF BEASTS
Dear Lion,
I’m tired of doing the hunting, the preying
While your only job is to watch the cubs playing.
I’m tired of stalking the zebras and gnus
While you lie around on the grassland and snooze.
I’m tired of running, and pouncing, and killing.
I want a career that is much more fulfilling.
I’m tired, so tired. I’m spent to the core.
While I’m hard at work, you just eat, sleep, and snore.
I fetch all the food. You grow stronger…I thinner.
For the next seven days you can catch your own dinner!
I’m going away for a well-needed rest.
I’ll be seeing you soon.
All my love,
Lioness 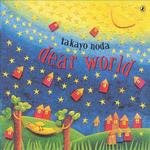 DEAR WORLD
Written & Illustrated by Takayo Noda
Dial/Penguin Putnam
2003
In DEAR WORLD, Takayo Noda writes poems that focus mostly on the natural world. She writes her letter poems to apples, the dawn, the sun, snow, trees, the stars—to a turtle, a bird, and fish. Her watercolor and collage illustrations are colorful and visually stunning. They absolutely add another dimension to her text.
Here are excerpts from three of the letter poems in Dear World:

I see you
sleeping alone
on the rooftop

Unfortunately, Love Letters is now out of print—but you may be able to purchase a used copy. The book includes love letter poems written to a dog, a cat, to a little sister from a big brother, to a snoring dad from his son, to a teacher from a secret admirer, and to a “prince” from his “potential princess”--and many others


Here is the last poem from Adoff’s book:

Dear Once Upon A Time:

I
know
we can
write
that
story
together
if
we
just
put
our
heads:
ear
to ear.
our
faces:
eye
to
eye.

At Blue Rose Girls, I have a video of Naomi Shihab Nye reciting a “found” poem she wrote using things that her young son had said. The poem is called One Boy Told Me.

This week at Political Verses, I have to new poetry posts:
Bye-bye, Bybee and Extended Engagement: A Poem by J. Patrick Lewis

Posted by Elaine Magliaro at 2:01 AM

Elaine, thanks so much for sharing your Goldilocks poem. It was great. Has the collection of fairy tales poems it's in been published? I'd love to get a copy. Fairy tales are a favorite of mine. I did a project about women poets and fairy tales once. I got to read multitudes of fairy tale poetry and even wrote some of my own.

The idea of letter poems intrigues me. I haven’t worked with the form before, but you've inspired me to try.

Great post! Love your goldilocks and lioness poems. Thanks for sharing those collections, too. Must check them out.

I never submitted my collection of fairy tale poems to a publisher. I had a lot of fun writing them!

I used to do an extensive unit on fairy tales and folktales in my classroom--including many versions of the Cinderella story. I had my students write fairy tales poems--and that's what inspired me to work on my own collection.


Thanks, Jama!. I enjoy writing poems in the voice of fairy tale characters.

what a post! that was packed with all sorts of yummy goodness. even as a kid i thought goldilocks got away easy. thanks for this.

I have both of the collections you mentioned. My middle school students especially like Love Letters.

Your lioness poem reminds me of someone I know...ME! Well, maybe not the thinner part, darn!

Thanks, David. That Goldilocks should have been charged with breaking and entering by the fairy tale police.


Linda, my mother was much like the lionness in her younger years. She was always busy doing things for everyone but herself.

Oh thanks! I've not seen those titles. Love the Goldilocks poem, in particular.

I think both poetry collections would be great to have in a classroom library. It's just so sad that children's poetry books go out of print so soon. My students really liked the poems in Adoff's LOVE LETTERS.

Wonderful! First time I've heard of letter poems. When my children get older we'll have to give them a try. The Goldilocks poem impressed me. Bet Goldilocks wouldn't dare set foot inside the bears' house again after reading that one.

Elaine, I loved both your letter poems, but your lioness one really touched a chord with me. (I'm going to share it with my darling lion . . . who BTW is upstairs sleeping right now.)