I’m sorry to say I never got around to writing a review of J. Patrick Lewis’s poetry book Under the Kissletoe, which was published in 2007, last December. Shame on me! Well…I couldn’t let another holiday season pass without writing a review of this Christmas-themed collection of light verse. And Lewis is definitely a master of light verse! To my mind, he’s the Ogden Nash of children’s poetry. 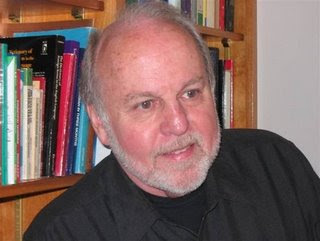 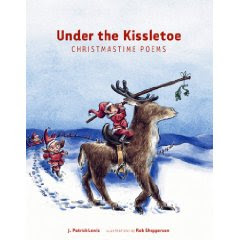 Under the Kissletoe contains sixteen poems. Here’s a little taste of some of the poems included in this book:

Here are the full texts of a limerick and another poem from Under the Kissletoe:

A woman named Mrs. S. Claus
Deserves to be heard from because
She sits in her den
Icing gingerbread men
While her husband gets all the applause.

When he splendid-
Ly descended,
But rear-ended…
On the coals!

Lewis provides a nice variety of topics and poetic forms in the poems he wrote for this book. There’s plenty of humorous verse between the covers of Under the Kissletoe—and lots of rhythm and rhyme and wordplay as well. Rob Shepperson, who has done editorial drawings for the New York Times and Washington Post, adds to the levity of the funny poems with his droll full-page and spot illustrations. Under the Kissletoe would make a great pre-holiday gift for a child, an elementary school classroom, or school library.

From the Wordsong Website: Excerpts of journal reviews of Under the Kissletoe

NOTE: I would like to thank J. Patrick Lewis for giving me permission to print the full text of two of his poems from Under the Kissletoe. 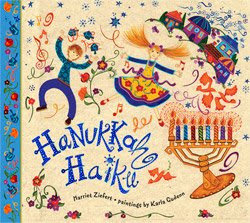 Hanukkah Haiku is a picture book in which the illustrations work as a perfect complement to Ziefert's short poems about lighting the candles on a Menorah (Hanukkiah) each of the eight nights of Hanukkah. Each two-page spread includes a full-page illustration on the left side and a haiku and a close-up illustration of a Menorah on the right hand side. With each turn of the page, one finds another candle lit in the Menorah and a haiku about the traditions of this holiday—spinning a dreidel, frying latkes, giving gifts of gelt, listening to the story of the Maccabees. Gudeon’s celebratory illustrations done in jewel tones are gorgeous. Her pictures, borders, and endpapers abound with intricate patterns and symbols of the holiday. The back matter of the book includes the traditional Hanukkah blessings in both Hebrew and English and information about the Shammash and lighting of the candles. Hanukkah Haiku would make a fine addition to a collection of holiday books.

From the Blue Apple Books Website: Reviews from Kirkus and School Library Journal.

At Blue Rose Girls, I have links to the reviews I wrote of children’s poetry books that have been nominated for a 2008 Cybils Award.

The Poetry Friday Roundup is at Mommy’s Favorite Children’s Books.

Posted by Elaine Magliaro at 2:44 AM

Love the Mrs. S Claus poem! Isn't the wife always the behind the scenes showmaker? :0)
Thanks for the great reviews! I will have to check these books out!

I liked The Mrs. S. Claus poem, too. It did strike a chord with me.
I always enjoy reading Pat Lewis's light verse.

I really love the illustrations in Hanukkah Haiku!

Thanks, Elaine. I have not seen Hannukah Haiku but must now.

And what a nice reminder to get out my Kissletoe copy. I think I have it somewhere.

P.S. I just went to Karla Gudeon's web site. WOW. I'm going to see if we can feature some of her art at 7-Imp.

Gudeon's art is gorgeous, isn't it? I saw some of her original paintings at the R. Michelson Galleries in Northampton, Massachusetts, a few weeks ago and was really impressed!

Hanukkah haiku - man, I would've liked in on that action. Alas.

To my way of thinking, Ogden Nash is the Ogden Nash of children's poetry, and Pat is something much, much more. ;)

Thanks for the sweet encouragement, Elaine! I really enjoyed your blog post as I haven't seen either of those works!

Pat is definitely one of the best writers of humorous poetry for children. My elementray students really enjoyed his light verse.

Welcome to Poetry Friday in the kidlitosphere. I look forward to reading more of your poems.

Thanks for these thorough reviews, Elaine. You've definitely made me anxious to read both collections. The Ten-Point Snowman Inspection sounds especially appealing to me :)!

When I was an elementary librarian, I found I could never have enough holiday books at this time of year. The books seemed to fly off the shelves--as if they had wings.

The Santa prefers the front door reminds me of the Olivia Christmas book inwhich Olivia gets very mad at her father for wanting to build a fire on Christmas Eve. What great finds are these!

I'm just sorry I didn't get around to writing a review of UNDER THE KISSLETOE last December. My friend who owns a children's bookshop recommended HANUKKAH HAIKU to me. She knew I wouldn't be able to resist buying it.