Sixteen Years in Sixteen Seconds: The Story of an Olympic Champion Who Faced Discrimination 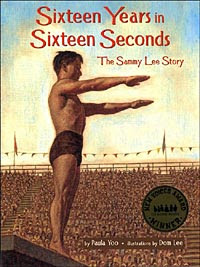 Sixteen Years in Sixteen Seconds is a picture book biography about an Olympic champion who overcame personal challenges in his life to achieve his dream of winning a gold medal in diving. This is also a book about racial discrimination in the United States and about an individual who honored his father’s dream of his son becoming a doctor.

Sammy Lee, born in California in 1920, was the child of Korean immigrants. Sammy dreamed of becoming an Olympic diving champion. Unfortunately, the public pool in his city only allowed “people of color” to use the facility one day a week. Fortunately, when he was eighteen, Sammy met a man named Jim Ryan who saw the young man’s diving potential. “Coach” Ryan even dug a giant hole in his backyard and filled it with sand so Sammy could practice diving into the sandpit on the days when he was not allowed into the public pool. Sammy enrolled in gymnastics at school to help develop stronger leg muscles. He loved diving and felt it was “the only world” where he belonged.

Sammy worked hard--at diving practice, at school, and on his homework. He earned all A’s, was voted the student Most Likely to Succeed, became the first nonwhite student elected student body president, and was even offered a full scholarship to Occidental College. Still, he could not attend his own senior prom at the Pasadena Civic Auditorium--which “only white students were allowed to enter.”

Sammy’s father also had a dream for his only son. He wanted Sammy to study to become a doctor. He told him it would be the way for him to earn the respect that he deserved. Sammy and his father “struck a deal.” Sammy would be allowed to continue diving as long as his college grades were good enough for him to get into medical school.

In 1943, Sammy’s father died--but Sammy was determined not to let his father’s dream die. Sammy took a break from diving. He worked hard and got “accepted in a special United States Army medical training program. He discovered he did have a passion for medicine and became a doctor in 1946.” That same year, Sammy entered the national diving championship and won the high-platform dive. Despite all of Sammy’s achievements, there were times when he faced racial discrimination: Once, he was forbidden from entering a restaurant with friends after a diving exhibition. And he was still restricted from using certain “pools except on assigned days.”

Sammy didn’t let this unfair treatment get him down. Instead, he worked hard to prove himself in the 1948 Olympics. And, sixty years ago in the Olympics at the age of twenty-eight, Dr. Sammy Lee became the first Asian American to win an Olympic gold medal.

From NPR: An Excerpt from Sixteen Years in Sixteen Seconds
Anastasia Suen has the Nonfiction Monday Round-up at Picture Book of the Day.
Posted by Elaine Magliaro at 10:00 AM

I love this book (reviewed it back in May, Asian Pacific Heritage Month). Thanks for the link to Paula's post. Very interesting!!

I really like this book, too. It's about discrimination and personal achievement and perseverance--and a wonderful story to share with young children. Dr. Lee must be quite a man! My friend who owns a children's book shop had recommended the biography to me a few years ago. I, in turn, recommended it to the students in my children's literature course. I thought this would be a good time to post a review of a book about this Olympic champion. I'll have to check out your earlier review.

I am so glad you posted about SIXTEEN YEARS IN SIXTEEN SECONDS. The book is wonderful and an important addition to classrooms around the world.