Here is a new book written and illustrated by my good friend and fellow Blue Rose Girl Grace Lin that’s hot off the press—and just in time for the 2008 Lunar New Year, whose celebration begins on February 7th. 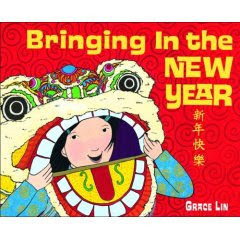 Bringing In the New Year, a picture book for preschool and kindergarten age children, provides a brief introduction to this holiday and to a number of traditions observed by people who celebrate it. Like Dim Sum for Everyone! and Kite Flying, two of Lin’s previous picture books, Bringing In the New Year has a spare text and bright, exuberant illustrations replete with Lin’s trademark use of intricate patterns and background swirls. The book’s colorful endpapers illustrate many of the objects (spring couplets, firecrackers, a good luck sign, a spring lantern) and foods (a whole fish, oranges, dumplings) that are integral elements of the New Year celebration.

In this story, a family with three daughters prepares for the holiday. One of the daughters, the narrator, explains what the family does to make ready for the New Year. Jie-Jie sweeps out the house, Ba-Ba (the father) hangs the spring-happiness poems, and Ma-Ma (the mother) makes get-rich dumplings.

The narrator wonders when the New Year will arrive. Will it come when she puts on her qi pao dress for the feast? When she hears the firecrackers popping? After the lions scare away the old year’s bad luck? When the children carry lanterns to light its way? No…it’s not until her Auntie paints the dragon’s eyes open and the dragon awakes that the young girl knows that the New Year has arrived at last!

About the Illustrations: In the two-page spread that includes the book’s title page, Lin foreshadows the coming New Year. We see a red dragon—a stream of snowflakes swirling from its mouth—flying across a wintry blue sky above a snow-covered countryside toward the family’s house. Outside their home the world is cold and white and blue…until Ba-Ba and the girls hang the red lanterns, the good luck sign, and the spring-happiness poems. Inside warm yellows and reds abound.

It is with her art that Lin captures the excitement and flavor of this Chinese holiday. In the pictures, we see platters of traditional Chinese New Year foods, children dressed in special holiday attire, fireworks bursting in the sky, the multi-colored lions brought in to scare away bad luck, children marching along in line with lanterns of different shapes. The dynamic three-page spread at the story’s end is a riot of colors and patterns and smiling children—a multicultural cast of children welcoming the New Year in as they parade with a huge golden dragon, drums, cymbals, and horns. What a festive way to “bring in” a New Year—and what a dynamite way to end a picture book about the holiday!

At the back of the book, Lin includes information about the symbolism of the Lunar New Year foods and traditions. Bringing In the New Year would be a fine book to introduce young children to a holiday that is celebrated by many people in the United States and by many millions of people in other parts of the world.

(Check out this post at Grace Lin’s old blog to see a preview of the book’s three-page spread.)

For older children: Grace Lin’s first novel The Year of the Dog also touches on many of the traditions observed by families who celebrate the Chinese New Year. 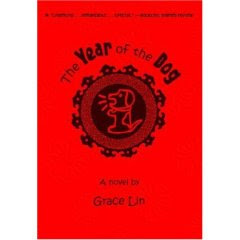 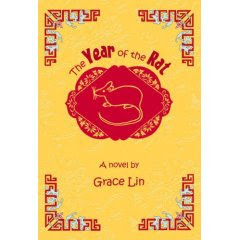 Crafts and Activities for Chinese New Year from Enchanted Learning

Posted by Elaine Magliaro at 5:35 PM

Thanks, Elaine. Can't wait to see this.