Poetry Friday: Into the Sea

Here are two picture books for those of you who think that summer is the perfect time to read some sea-themed picture books with young children. 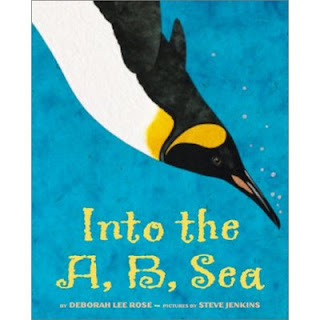 INTO THE A, B, SEA
Written by Deborah Lee Rose
Pictures by Steve Jenkins
Scholastic, 2000

INTO THE A, B, SEA is a rhyming alphabet book about marine animals. The featured creatures in this book include Anemones, Barnacles, Crabs, and Dolphins—as well as Yellowfin and Zooplankton. The only problematic letter for Rose was X, which appears embedded in the word exhale: Whales eXhale. In spite of X, this is an excellent A, B, C book to share with young children—especially those who have an expressed interest in animals that inhabit our oceans.

Rose’s rhythmic, rhymed couplets scan well. Her meter and use of language are exemplary as she describes the movements and actions of different sea creatures. The book begins:

Swim the ocean waves with me
and dive into the A, B, Sea

where Anemones sting
and Barnacles cling

where Crabs crawl in
and Dolphins spin


At the end of the book, Rose includes a section called More about the A, B, Sea…. This section contains a bit “more” information about each of the creatures named in the text. The author also acknowledges a number of organizations for their advice and inspiration.

The book’s cut-paper collages created by Steve Jenkins are colorful and uncluttered and let each of the different sea creatures stand out on their respective pages. Jenkins captures well: playful dolphins leaping from the water, the power of a humpback whale breaching in a spray of white water, the curving tentacles of an octopus that is being engulfed in a cloud of black ink, the jaws of an umbrellamouth spread wide open to capture its prey, the sinuous movements of an eel and a leopard shark, the spiny skin of a sea star. His cut-paper jellyfish seemingly floats on a background of indigo. The final two-page spread teems with tiny and enlarged zooplankton. 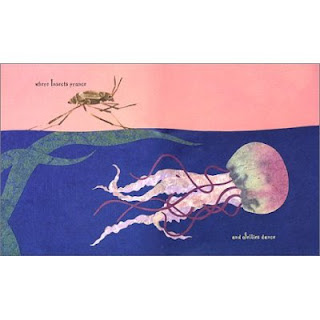 When I was teaching, I was always on the lookout for picture books in which authors select their words carefully—books that would be excellent for helping children enrich their vocabularies. INTO THE A, B, SEA is certainly a good book to use to help expand a child’s vocabulary. I’d have children name the action words (verbs) in the text. With really young children, I’d ask specific questions to elicit responses: What do the barnacles do? (Cling) What do the manatees do? (Lumber) I’d make a list of the words—and explain the meanings of those with which my students were unfamiliar. Children could refer to this list of words later when they were writing their own stories or poems. 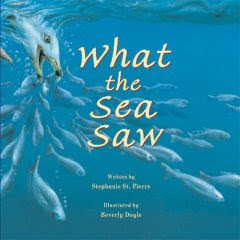 WHAT THE SEA SAW is not a picture book written in verse—it is, however, a book with a lovely lyrical text. The book provides readers with different points of view of the sea as seen/perceived by the sky and by fish and by the sea itself. Here is how the book begins:

What the sea saw was sky above.

What the sky saw was sea below.

The sea saw
a gull shoot from the sky
leaving the wind empty.

The gull saw fish with scales shimmering silver. The fish in the water saw light on the waves weaving into the deep…stringy seaweed gardens…lobsters with clamping claws.

We rise from the sea and are transported to the shore where waves crash and splash and foam…and treasures are left behind in tide pools that mirror the sky…and sandpipers run across wet sand…and beach plums ripen in the sun…and starfish cling to rocks.

Later, the moon rises in a purple night full of stars and the sea sees a ring around the moon. The sky sees a dolphin leaping from the sea. The book ends as dawn arrives in a luminous two-page spread of an early morning sun lighting the horizon—its golden rays glistening on the surface of the ocean and the sand.

At the end of the book, the author includes further information and some eco-tips for readers about the shoreline, the dunes, and the ocean’s ecosystem. The illustrator provides a list of books that she found helpful in developing her paintings for WHAT THE SEA SAW.

Doyle’s illustrations—done in airbrush on illustration board—capture the essence of St. Pierre's poetic text. Her changes in perspective help readers to “see” what the sea, the sky, and the fish saw from their points of view. There are close-ups of starfish and sandpipers, a fearsome looking lobster, butterflies tangled in a spider’s silk that is strung between blades of dune grass, and small sea creatures left behind in a tide pool. There are paintings of foam-tipped waves, and sand dunes, and moonlight shimmering on the sea at night. The illustrations, in effect, help readers experience what the sea, the fish, and the sky saw...between the covers of a children’s picture book.

Posted by Elaine Magliaro at 6:46 AM