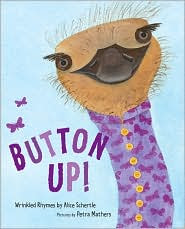 Button Up! Wrinkled Rhymes
Written by Alice Schertle
Illustrated by Petra Mathers
Harcourt Children’s Books, 2009
Today I have a review of Button Up!: Wrinkled Rhymes by Alice Schertle. I was really excited when I learned many months ago that Schertle had written a new poetry book. I have been an admirer of her work ever since I read How Now, Brown Cow, her first published poetry collection. Button Up! is a delight from start to finish. Schertle's poems are infused with humor and a childlike sense of fun. The illustrations done by Petra Mathers, the perfect complement to Schertle’s text, express the same sense of playfulness and whimsy. 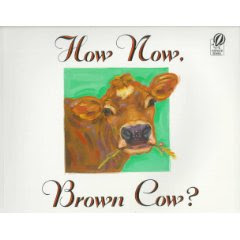 I was especially happy to find that Button Up! was collection of mask poems. (I love mask poems!) Button Up! contains fifteen point-of-view poems in which the author speaks in the voices of shoes, shoelaces, galoshes, a soccer jersey, bicycle helmet, jammies, dress-up clothes, and undies—all of which have their own personal stories to share. The characters wearing the aforementioned footwear, headwear, and clothing are anthropomorphized creatures—pigs, cats, birds, dogs, bears, alligators, etc. Mathers artfully imbues her animals with human facial expressions and body language.
Like Mathers’s animals, Schertle’s poems all have their own “personalities.” Their rhythms and rhyme schemes vary. The book of poems never gets bogged down in a boring “sameness.” 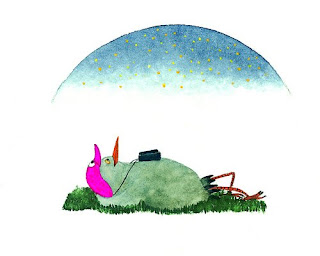 I asked Alice Schertle if there was anything she could tell me about where she got the inspiration for this book, how long it took her to complete the collection, or any other interesting facts she’d like to share about Button Up!.
Alice responded: Button Up! started with one poem, Jennifer's Shoes--and that was years ago. I wrote that one in the course of fiddling with shoe poems in general, liked it, and found it handy to use when I'd talk about mask, or persona poems. Much more recently I began adding to my stash of poems in which kids' jackets and shoelaces and hats are doing the talking and it began to look like a collection. The trick was in finding the duds that children would recognize and trying to give them a bit of individual personality. Once I got going, assembling, choosing and discarding, it probably took half a year. I found myself chuckling as I wrote: always a good sign.
I, too, chuckled as I read the poems in Button Up!. I’m sure you will too!
Here are some tasty tidbits from a few of the book’s poems to give you a flavor of the delicious verses in Button Up!:

We are learning the ways
of Jennifer’s world:
the way that Jennifer’s
toes are curled,
the softness of carpet,
the steepness of stair,
the curve of the rung
under Jennifer’s chair…

When Jack plays soccer we get our kicks.
I’m Jack’s jersey.
I’m number 6.

I’m a gingham sheet and I used to sleep
tucked into the guest room bed.
One day—surprise! Clyde cut out eyes
and slipped me over his head.

And here is the first stanza of my favorite poem in the collection—Emily’s Undies:

We’re Emily’s undies
with laces and bows.
Emily shows us
wherever she goes.
She doesn’t wear diapers,
not even to bed.
Now she wears undies
with ruffles instead.

I know my elementary students would have loved Button Up!. Many of them enjoyed writing their own mask poems--and the poems in this collection serve as fine examples. I highly recommend this book.
Alice Schertle Interview

More Mask Poems
You can read some of my previous posts about mask poems and some of my original mask poems in the following Wild Rose Reader posts: Earthworms: An Animal Mask Poem, Poetry Friday: Mask Poems, JACK: A Mask Poem, Toucan Talk: An Original Mask Poem, and Mask Poems Reprise.
********************
At Blue Rose Girls, I have four original autumn acrostics.
I have two new poems this week over at Political Verses— GOING ROGUE: A Poem about Sarah Palin & Her Book and Onward to a Teacher's Life: A Poem Written in the Style of Peggy Noonan.
Kelly Herold has the Poetry Friday Roundup at Crossover this week.
Posted by Elaine Magliaro at 2:04 AM

I had the opportunity to meet and work with Alice last week and found her to be amazingly knowledgeable (I might even say genius) about poetry. She can write anything, and she's so adept at form.

Thanks for posting the video. I just love hearing her talk about her work and writing.

You were fortunate indeed to meet Alice. I love her poetry. Janet Wong sang her praises to me.

I wish all of Alice's poetry books were still in print.

Alice is a genius! I have been a fan for more than 20 years...thanks for including interview....I second the wish that all of her books still be in print!
Carole in Hermosa

Thanks for the video! Love that book.

Alice is definitely one of the finest children's poets. That's I was so happy when I found out she had written a new collection.

BUTTON UP! is one of my favorite children's poetry books published in 2009.

the curve of the rung
under Jennifer’s chair…

And the way Emily shows her new ruffled undies everywhere.

I've just put this on reserve at the library, and I'm guessing it will go on my to buy list after that!

I know you'll enjoy reading BUTTON UP!--especially if you like mask poems as much as I do.